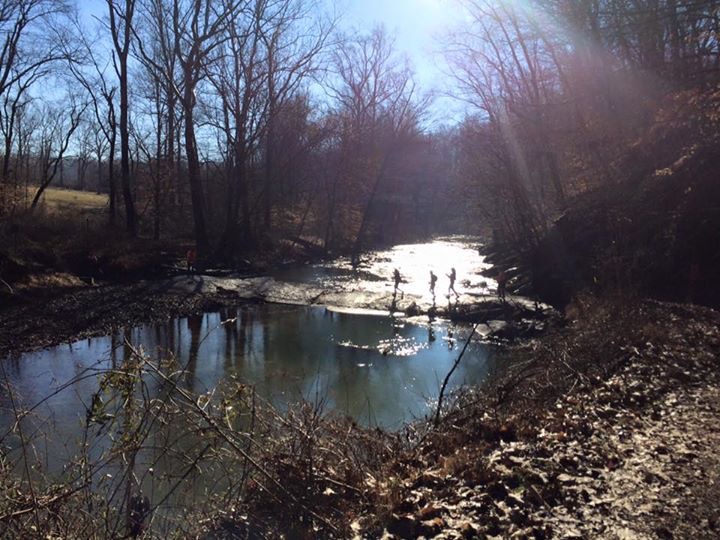 The 13th Annual PHUNT 25K/50K trail race was held on Saturday, January 16.  The race starts in Fair Hill Natural Resources Center near Elkton, Maryland and winds for 15 ½ miles back to the starting point; complete 2 loops for the 50K.  Fair Hill is located near the junction of Maryland, Delaware and Pennsylvania.  January in Maryland is known for being very cold, usually icy, and this race in particular is held no matter the weather conditions.  As luck would have it, this year was extremely mild.

(This is a guest post by our friend Karen Meddows-Carey from Baltimore, Maryland)

Getting Talking Into Running the PHUNT 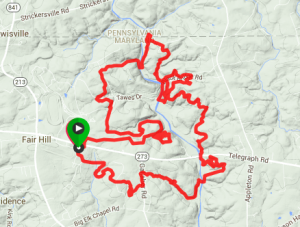 I had not done much in the way of real trail running when I signed up for this race.  I have been running about 3 years, and the furthest distance I had run was the half marathon, all those being road races.  I was basically “chickened” into this race by some of my other running friends during the summer.  The low registration fee of $35 included a long sleeve tee shirt (to the first 250 of 400 cap) and medal.  So, I registered.  In September, I started to run more technically difficult trails with my friends.  In October, I completed my first 10K trail race.   As I read the Facebook update posts by the Trail Dawgs, I quickly realized that this was going more of a fun race.  There were constant updates regarding amenities (beer at the aid stations and finish!), how many spots were open, and participants tell telling the story of their first PHUNT Race.  Two days before the race, the Facebook page promoted “rain/snow mix” as being perfect PHUNT weather!  What had my crazy friends talked me into?

I volunteered to work the packet pickup at the Activity Hall Friday evening.  This was a wonderful chance to talk with the Race Director, Carl Perkins.  Carl shared some of the history of the race.  PHUNT (pronounced FUNT) started 13 years ago as a fat ass run amongst friends in the dead of Maryland winter.  PHUNT stands for the first names of the two founders, Phil and Hunt.  Carl has worked very hard to promote this event and make it bigger.  It was in the Trail Runner’s Magazine’s upcoming 2016 Race Directory.   I was able to meet about a quarter of the runners, discussed with them the distances they were going to run and whether this was a repeat race for them.  For my volunteer time, I received the PHUNT beanie for free. 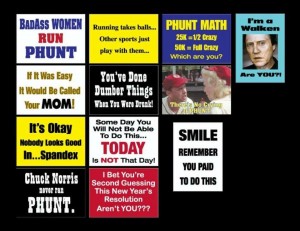 GORE-TEX is a major sponsor of this race, so there was a representative at the packet pickup and on race day to discuss the different GORE-TEX shoes.  GORE-TEX was also running a hashtag contest of how do you #OwnTheRun.  Incorporate the free GORE-TEX glow armband in a photo and post it to Social Media before noon, and two winners would receive GORE-TEX quarter-zip jackets.

A friend of mine, Andy, had decided he was going to run this race with me.  His pace is usually faster than mine.  In November, I helped support him on a previous race.  He was running the whole NCR Trail Marathon, and I ran the second half of the relay because he was not confident he would finish.  He wound up walking from his mile 18-24, so I walked with him (my mile 5-11).  I’m glad Andy stayed with me during this race; I much prefer to have someone with me while I run on trails.  I have a tendency of tripping and falling down on rocks and roots, and really did appreciate his support during the race.  He encouraged me the whole time to press on especially in those last few miles.

Start of the Race 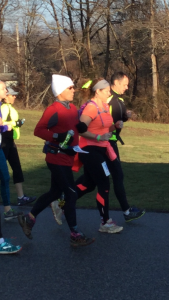 Race start. That’s me in orange and Andy in black. Photo by my daughter Maggie Carey.

At 8:45, Carl climbed to the top of a ladder, gave a brief rundown of the trail markings (signs and yellow contractor streamers), and where the aid stations were with porta-potties (miles 3.5, 7 and 10.5 and the Activity Center for those doing the Full 50K Monty).  We left the hall to the sound of AC/DC’s “Highway to Hell”.  Temperature at race time was a balmy 41°.  As we walked out the hall, I removed my quarter-zip jacket to run in short sleeves.  This was the first time I was going to use a Camelbak.  Emails and FB posts told me that there would be Heed Sports Drink at the aid stations.  Since I’d never had Heed before, I stocked myself with 24oz Gatorade in the Camelbak.  I am going to tell you, I loved running with the Camelbak.  Not only did I have a place to stow a little trail mix, chapstik and tissues – taking a drink was simple!  It was no longer a process of unholster the bottle, squirt and return; it was lift the hose and sip.

Carl blew an airhorn to start the race.  The first half-mile or so takes place on road and field, a chance for runners to get some distance between each other before the single track trail starts.  There was everything the seasoned trail runner would want – uphills, single track, and stream crossings.  It had rained the night before, so parts of the trail were really muddy.  The first aid station was stocked with a wide array of both salty and sweet snacks, bacon & peanut brittle, beer and Jell-O shots.  I grabbed water, M&Ms and a couple Fig Newtons.  We crossed several bridges, even a quaint covered bridge.  My favorite river crossing was over rocks at the 5 mile mark (see picture at top of this blog post.  Photo by Sean Toohey).  Unbeknownst to me at the time, mile 5.5 actually dipped into Pennsylvania.  The second aid station was called “PHUNT Chalet”, and featured more of the sweet/salty snacks, a roaring campfire and fresh made s’mores.  Oh, I had to have one of those!  Now, that’s refueling… 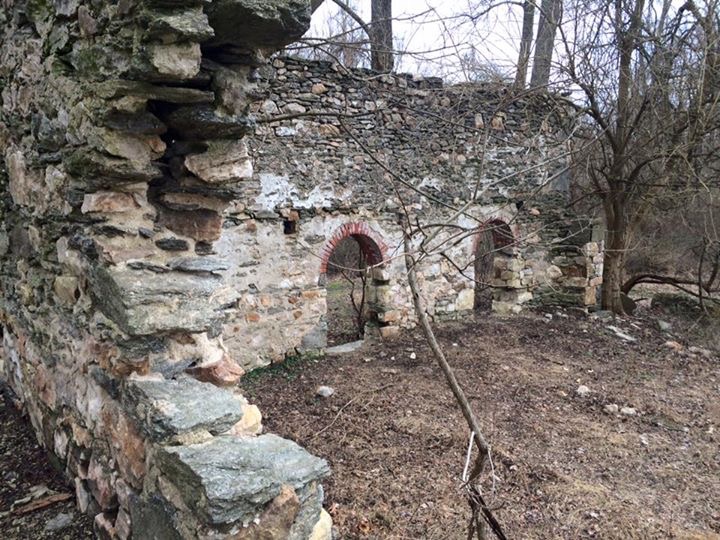 The ruins of Scott’s Mill at Fair Hill NRC (photo by: Sean Toohey) 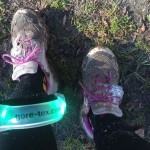 Somewhere after the second aid station, we passed the remains of a couple stone buildings.  These are what’s left of Scott’s Mill. See picture above.

The trail into the third aid station was probably the most treacherous, with a big downhill of large rocks that were coated in mud by the time I got to them.  What’s a trail run without muddy shoes? My shoes were caked with mud, and I thought I might fall.  I held onto trees, I made it.  I refueled with water, two fresh orange quarters and a handful of Swedish fish.  Five miles to go! 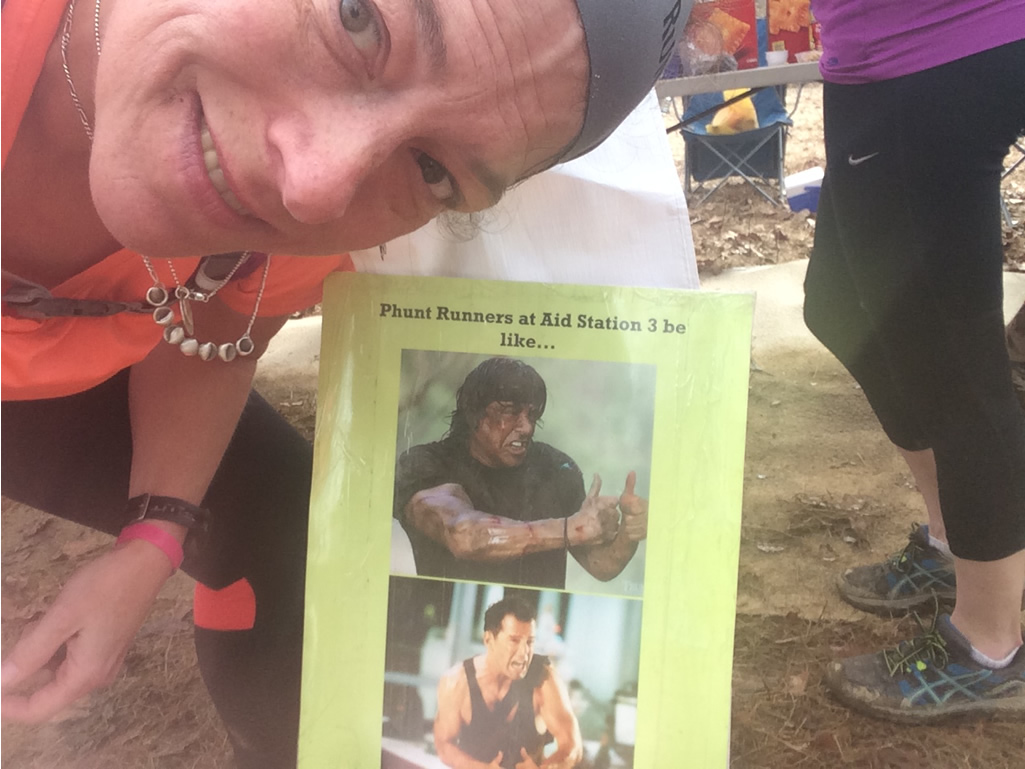 Me at Aid Station #3 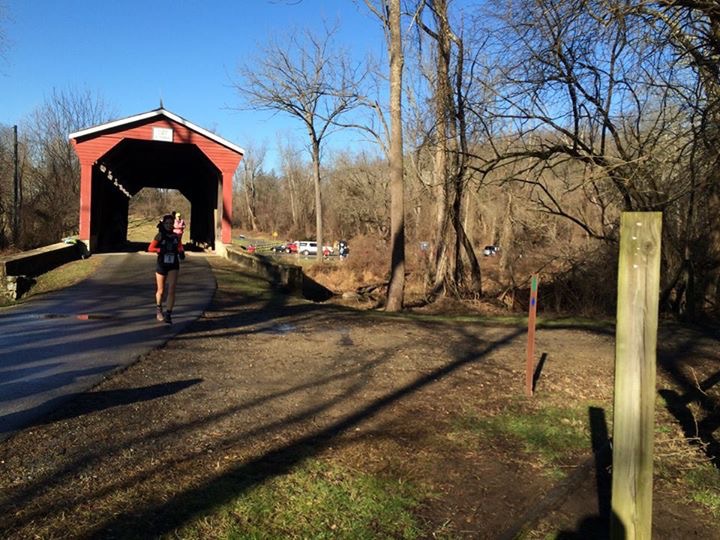 Finishing the Run – Which Way Do We Go? 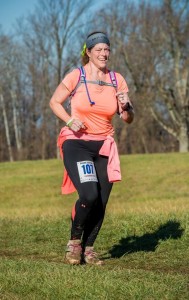 Just after a river crossing at the 12 mile mark, about 6 of us realized we hadn’t seen any trail markings.  You know how you get into a groove, and you more or less are following the person in front of you?  Well, Andy and I fell into that groove.  We found ourselves in a field following a tractor path.  One of the other runners said he wasn’t sure if this was the right route or not.  We debated for a few minutes, and I had pulled out my phone to access the official race map.  Another runner had opened up his map feature, and said that we were perhaps 2 miles from the Activity Center, as the crow flies.  About this time, a man on a mountain bike was coming up and heading in our same direction.  He rode ahead of us through the fields, and signaled to us that he found one of the official race signs.  I don’t know if our detour cost us much in time or distance, but we were able to find our way back to the race trail for the last section of the race.

About a mile from the finish, I came across a Baltimore Road Runner Club friend and Ragnar Captain.  She slipped in the mud and twisted her ankle.  I helped her up, offered her aid, which she refused.  I stuck with her for about a quarter mile to make sure she was doing okay.  I started seeing runners with the finisher medal on the trail, so I knew I was getting close to the end.  Unfortunately, my Garmin died about ½ mile from the finish.  I also had the RunKeeper app on my phone.  I was really tired by time I hit that finish line, 3 hours and 48 minutes after starting.

My Garmin recorded an elevation gain of 1,396 feet, and RunKeeper 1,720 feet.  I’m a little disappointed, as the official race map records 1,867 feet elevation gain.  It was a hard race; not because the trail was difficult, it was the long distance. 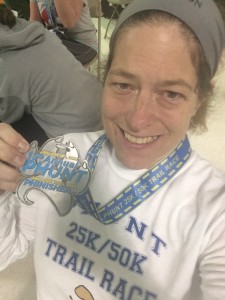 I had not put my body through that much physical activity.  Ever.  When I finished the race, I headed into the activity hall.  My legs were wobbly.  I sat down to remove my muddy shoes, and the legs started to cramp.  I tried to stretch out, but the muscles were still twitching badly.  It took about 15 minutes for that sensation to go away.  I consumed a bottle of water.  Andy asked if I was ready to start loop #2, and my answer could not be printed in a family-friendly place.  I took a few moments to change into clean, dry clothes.

After the race, there was plenty food at the Activity Hall.  Homemade vegan lentil barley soup, meatballs, meatless “meatballs”, fresh french fries, coleslaw and more beer.  Since the medal was a bottle opener, many runners put that medal to good use!  Sure, I had just one.  Runners who were not able to get a race shirt could purchase one; and there were pint glasses ($5), shot glasses ($3) and two versions of the PHUNT Beanie hat ($8) for sale.  Awesome food, great music and racer camaraderie made for a nice post-race party. 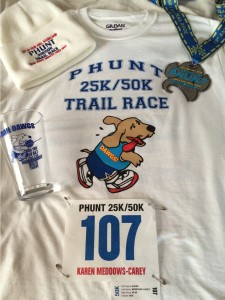 I wasn’t expecting much in the way of Official Results for this race.  When someone on the Facebook page inquired about their official time, Carl’s reply was, “Well, you finished!”  On Tuesday, Official Results were posted on both the Trail Dawgs Website and the Facebook page.  I was pretty pleased – my official time was 3:48:47, I came in #357 of 436 25K finishers, and 21 of 29 in my F 45-49 age group.  My pace was 14:50.  I went into this race fully expecting to finish somewhere around 4 hours given my training trail run pace.

In all, 436 runners completed the 25K distance, 105 of those went on and successfully completed the second loop to get the Ultra 50K.  Well done, Runners.  I personally thanked Carl with a hug for an awesome event.   I cannot wait to do next year’s PHUNT Race.  Registration is already open on the Trail Dawgs website. The registration fills up pretty fast, and Carl will keep a waiting list.

Epilogue:  As I sit to write this now, the central east coast is being hammered by Winter Storm Jonas, which dumped 28” of snow on Baltimore in 36 hours.  Many runners are Facebook commenting how today is more PHUNT-like weather.  I don’t mind the snow, but I think I would rather stay home in a blizzard! 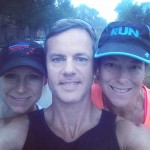 Karen Meddows-Carey is a wife, mother, and runner living in Baltimore, Maryland. A full-time retail human resources professional, she also enjoys astronomy, reading, science fiction, historical re-enactments, and (of course) running. Karen took up running three years ago to get in shape and lose weight.

Running has literally changed Karen’s life.  She has lost over 50 pounds, made life-long friends, and enjoyed great adventures like the one in this race report.  She is active in the Baltimore Road Runners Club and the local Baltimore-area running scene. This is her first race report for the #MarriedRunners blog. 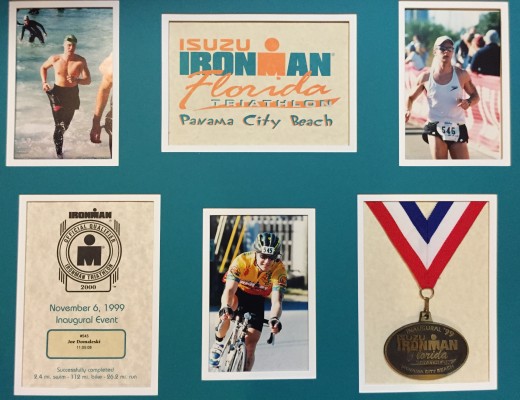 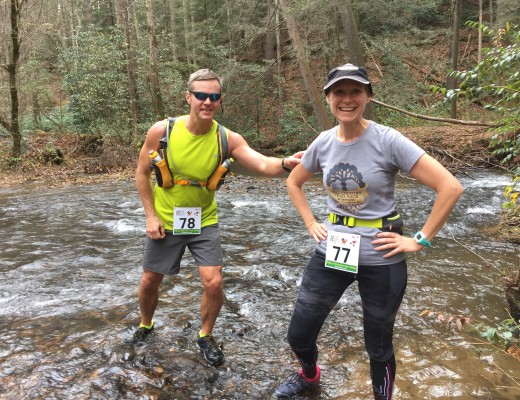 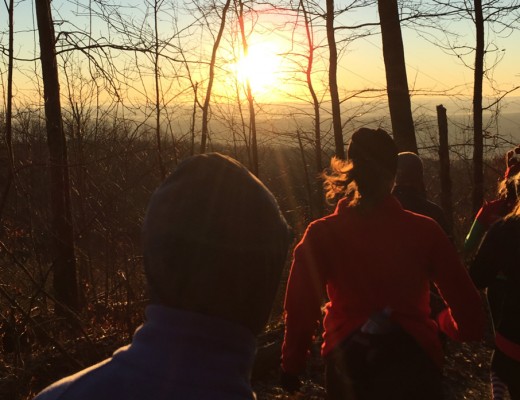